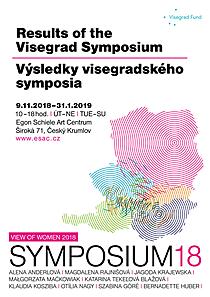 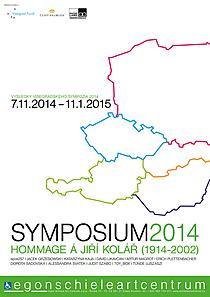 This year the Egon Schiele Art Centrum has once again organized an international symposium; this time artists from the V4 countries (Czech Republic, Hungary, Poland, Slovakia) and from Austria were invited. The common working theme was IN HONOUR OF JIŘÍ KOLÁŘ, the poet, fine artist, translator and art theoretician. He was a good and generous man, with whom the Egon Schiele Art Centrum closely collaborated in the 1990s organizing several exhibitions for him in various European countries.
Simultaneously with the appearance of the catalogue, in which we present a selection of the results of the creative work of eleven artists from five countries, we are displaying the results of the symposium to the general public in an exhibition that will run until 11.1.2015.

Talented artists from the Visegrad countries (Czech Republic, Hungary, Poland and Slovakia) plus Austria will reside in the Český Krumlov studios of the Egon Schiele Art Centrum during the autumn and create artworks on the theme of “Art and the Everyday“. A selection of these works will be exhibited in the gallery from December 2011 till March 2012. 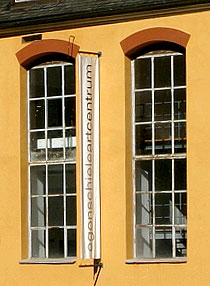 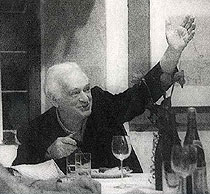 INTERNATIONAL SYMPOSIUM, 2006
ČESKÝ KRUMLOV AFTER THE OPENING OF THE BORDER
MEMORIES OF SERGE SABARSKY (1912-1996)

During the whole of February 2006 approxmately 15 artists from Czechia, Austria, Germany, Jamaica and Moldavia will deal with this topic in the Egon Schiele Art Centrum. The symposium concentrates on the artists´view of Český Krumlov - Schieles "dead city" – many years after the border opening. The artistic view during the deadest month of the year as regards tourism could offer interesting insights and perhaps also pinpoint problems, which the march of time and changes in society have brought and which have become invisible to the citizens of the town and their municipal representatives or which they perhaps do not want to see. The results of these perceptions are to be presented to the public on the 10th anniversary of the death of co-founder Serge Sabarsky (1912 - 1996). He had a remarkable personality, a man who, at the age of eighty, travelled to a former eastern block country after the opening of the border and began to cooperate with a non-profit project (an international cultural center).

On Thursday, 23.2.2006 from 5 pm the results will be accessible free of charge in the exhibition hall of the Schiele Centrum as will the concert the following evening. The artists will be present (Miriam Bajtala, Tassilo Blittersdorff, Theodor Buzu, Ritula Fränkel, Bernadette Huber, Bernhard Mayer, Nicholas Morris, Helmut Mitter, Miroslav Páral, Edith Platzl, Eva Prokopcová, Norbert Trummer).

Further information:
Presentation of symposium results - photogallery
Český Krumlov after the opening of the border - memories of Serge Sabarsky (1912-1996)
‹ › ×